The 1980s is sometimes called the ‘Dark Ages’ of Bollywood. This was the era when the films were excessively violent, loud and regressive. The villains were at their peak in this era and the heroines were always damsels in distress getting raped and committing suicide. All the characters were either black or white. One seldom saw any shade of grey. However, this era of uni-dimensional characters gave some great films of its time like ‘Jaane Bhi Do Yaaro’, ‘Karz’, ‘Arth’ and ‘Satte Pe Satta’. Here are some trends from those great times that simply can’t go unnoticed!

The early 80s was highly influenced by the gangster culture of the West. Audiences lost their hearts to Zeenat Aman’s silver clad body swaying to the tunes of ‘Laila Main Laila’ and slayed their souls for Hema Malini when she flitted around in a black number, mouthing the words of ‘Mere Naseeb Mein’. Then there was the frenzy of fan-girls for the dashing Feroz Khan draped in a tuxedo in ‘Qurbani’ and the charming boy next door Rishi Kapoor of ‘Karz’.

The Music, Dance & the Item Numbers

Be it the nazakat of Rekha in ‘Umrao Jaan’, the pelvic thrusts of Mithun in ‘Disco Dancer’, or the heroines replacing the eye candy vamps in dhinchaak songs like Zeenat Aman in ‘Qurbani’ or Parveen Babi in ‘Shaan’, the 80s clearly had their fair share of songs and dances. Where Rekha reminisced the tragedy of a broken heart, the disco king Mithun Chakraborty broke many a heart through his pelvic moves.

Romance was still high in the 80s. Foreign locations, designer sarees and soothing music were the new formulae of any blockbuster. ‘Qayamat Se Qayamat Tak’ and ‘Maine Pyaar Kiya’ did justice to the innocent romance of those times with a petite, adarsh nari female protagonist and the stereotypical macho male going all out to stand up for his love playing the male lead.

1980s gave us spectacular pieces of Hindi Cinema such as ‘Arth’, ‘Saraansh’, ‘Jaane Bhi Do Yaaro’, ‘Angoor’, ‘Umrao Jaan’, ‘Aakrosh’, ‘Khoobsurat’ and ‘Ardh Satya’ to name a few. These explored a different narrative and picked up topics that were not solely romance driven. Some like ‘Chaalbaaz’ even had a purely female driven script.

This is the era that gave us ‘Mogambo Khush Hua’, ‘Prem naam hai mera, Prem Chopra’ and Dr. Micheal Dang in ‘Karma’. Clearly the villains were at the peak of their power in Bollywood in the 1980s.

Be it ‘Aaj rapat Jaye’ in Namak Halal, a sans blouse Zeenat Aman in ‘Satyam Shivam Sundarram’ or Mandakini in ‘Ram Teri Ganga Maili‘, the female sensuality was exploited to its hilt with white saree clad women shown frolicking in and around water and water bodies.

The Damsel in Distress Heroines & Ma

Every stereotype that can possibly exist where a woman can be shown in distress was shown in the movies of the 1980s. Be it the unwed mother, the innocent women screaming for help as goons chase her to rape her, the saintly Ma who would give up everything for her offspring and expect nothing in return, or the prostitutes with a golden heart, the filmmakers left no stone unturned in establishing women as the weaker sex.

The Khan Trio and their most loved tracks! 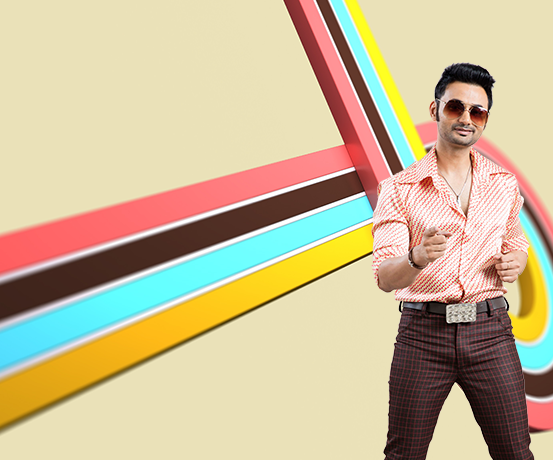